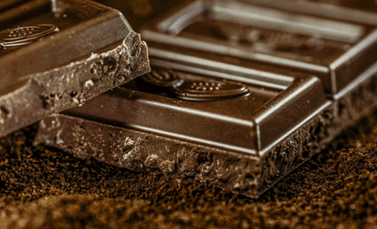 Chocolate is one of the most popular sweet treats in the world. Just the mention of the word makes many of us rush to the kitchen to unwrap a bar or indulge in a sweet dessert. Tony Hennessy, client solutions manager at IFP is no different, and is one of the huge group of people who (between them!) globally consume more than 3 million tonnes of cocoa beans annually. In this blog, he looks at the history behind this delicious treat, whether it be a darker, more bitter chocolate, white, milk or even ruby – there’s no doubt it is the ultimate ‘go-to’ or comfort food.

Is chocolate good for us?

In addition to being a lovely sweet treat, you may be surprised to hear that there could be health benefits to chocolate too. There have been studies which have examined the role that chocolate has on heart health. Cacao beans are full of phytonutrients, which act as antioxidants and provide additional benefits, which include enhancing immunity, detoxify carcinogens and altering oestrogen metabolism. Furthermore, cacao beans are rich sources of iron, copper, magnesium, zinc and phosphorus. Dark chocolate also contains two to three times more beneficial flavanols than milk chocolate, because milk chocolate’s cacao concentration is diluted with milk and possibly contains more sugar.

Where did our love of chocolate originate from?

There’s still a wide debate on this, however the history of chocolate goes back at least two thousand years. In several pre-Columbian Latin American societies, it is also believed that cacao beans were used as currency. Mayans and Aztecs believed that the beans had mystical properties and used them during important rituals. When the Spanish arrived, sweetened chocolate came into existence. Legend has it that the Aztec king Montezuma gave conquistador Hernán Cortés a bitter chocolate drink, which he said was disgusting. But Cortés’ men added cane sugar and honey to it and took it back to Spain, where it quickly became popular in the western world.

Chocolate in The West…

Drinking chocolate was fashionable for rich Europeans throughout the 18th century. The Industrial Revolution allowed chocolate to be mass-produced and introduced the treat to the masses. This popularity then led to the development of cacao tree plantations.

In 1815, Dutch physicist Coenraad Van Houten experimented with removing varied amounts of the cocoa butter from chocolate liquor and this then led to the creation of cocoa powder and soon after, solid chocolate.

In 1847 in Bristol, England, a chocolate company named Fry’s, created the first mass-produced chocolate bar when Joseph Fry added additional cocoa butter to Van Houten’s chocolate, which turned it into a mouldable paste. Milk chocolate was then invented with the help of Henri Nestlé, who went on to find the major food company that bears his name.

Creating the chocolate, we know today…

Major European chocolate brands Lindt and Cadbury were formed in the 1800s. J.S. Fry and Sons are not only responsible for the first chocolate bar, but also for the first chocolate Easter egg. Decorating eggs at Easter time had been a popular Christian tradition for centuries, but in 1873 Fry decided to create a chocolate version. This led to the vast quantities we see on the shelves in the Spring each year.

In 1923, Mars Co. developed the Milky Way bar by putting nougat inside a chocolate bar. That same year, former Hershey employee H.B. Reese introduced Reese’s Peanut Butter Cups, which later became part of the Hershey brand. These brands are more popular across the Atlantic but are enjoyed globally.

Innovation continued into the 21st century, and in September 2017, Swiss chocolate company Barry Callebaut introduced ruby chocolate to the market. Ruby chocolate comes from isolating specific compounds in cocoa beans and along with a modified processing technique, results in a rosy pink chocolate that has a sweet but sour berry. In fact, this chocolate has no traditional chocolate flavour.

As consumer trends evolve and we see more demand for vegan and dairy free foods on the supermarket shelves, chocolate production has also evolved to accommodate this. Whether it be a food intolerance, or a choice to not consume animal products, there will be an option for everyone in this modern age. Manufacturers have tapped into this market which looks likely to grow exponentially in the future as consumer attitudes evolve.

How science is changing chocolate production…

Climate change and the projected rise in temperatures are expected to be a threat to cacao production – directly impacting how chocolate is produced. Growers and scientists are working together to develop strategies to maintain chocolate production as weather patterns and temperatures shift. Some farmers are planting taller trees next to cacao trees to increase shade and decrease moisture loss, according to the NOAA. Cacao plantations may also move to higher elevations with cooler temperatures and greater rainfall.

Genetic scientists are taking a different approach. During January 2018, a press release from the Innovative Genomics Institute announced a project to develop disease-resistant cacao. Condensing cacao plantations because of climate change could also increase the spread of disease. The project will use CRISPR DNA-editing technology to make a heartier cacao seed, resulting in more environmentally friendly chocolate for us all to enjoy.